?Is the carpet lint natural

You are probably one of those people who have bought new carpet for a mosque or house and you are complaining about its lint!

First of all, we have to say that the lint of carpet that you have just bought is completely natural, and in this article we try to answer the following questions:

– Does every carpet have lint?

– What carpet should we buy that does not have lint?

– What is the cause of carpet lint?

– Is lint on the carpet a sign of poor quality?

– What should we do to remove lint on the surface of mosque carpets and home carpets?

In the following, we will answer the questions in detail:

First, watch the following video taken from the machine-woven carpet lint inside the factory, and then we will continue the discussion:

?Does every carpet have lint

These lints on the acrylic carpet is not a sign of poor quality carpet and even indicates that your carpet is 100% acrylic, which is one of the best quality yarns and has the highest price of carpets.

home carpets or prayer carpets made of acrylic yarn are much better in terms of physical properties and longevity than polyester carpets, and they are also more expensive. 100% acrylic carpets have primary lint and in fact this makes the softness of the mosque or home carpet more.

Acrylic carpet lint is due to the nature of acrylic fibers and is unavoidable, but there are ways to reduce the lint and we will mention these in the following.

Note: Acrylic fibers are called synthetic wool because of their similarities to natural wool fibers.

?What carpet does not have lint

In fact, if you are very sensitive to carpet lint, you should choose carpets without acrylic yarn, ie polyester, polypropylene or virgin carpets.

Polyester carpets have much less lint because they are made of plastic-like materials. The main problem with polyester yarn carpets is that they will be crushed and lose their original softness after a while.

But if you are looking to buy the best machine-woven carpet for the mosque or home, we definitely recommend carpets with acrylic yarn.

In order for the carpet with acrylic yarn to have the least amount of lint, a series of operations must be performed during the process of converting the fibers into yarn and finally during the production of the carpet so that the carpet is woven with less lint; Some of these operations are listed below:

– Sufficient water and oil must be used in the production when preparing the fibers.

– The spinning machines should be adjusted in principle.

– The yarns used in the carpet must be completely heat set.

The last case is very important that the yarn of the acrylic carpet must be heat set; Heat set is a process during which the fibers are exposed to high temperature (steam) and then cooled immediately after the fibers are spun in the spinning part. This operation creates changes in the yarn that increase the quality of the machine woven carpet yarn.

If the above is observed before production, the woven carpet will have much less lint or at least we will not see more lint than normal in acrylic carpets. Also keep in mind that typically the higher reeds and points of the carpet, the lower the lint; For example, a 700 reeds carpet will have less lint than a 500 reeds carpet (if an acrylic yarn is used in their texture). 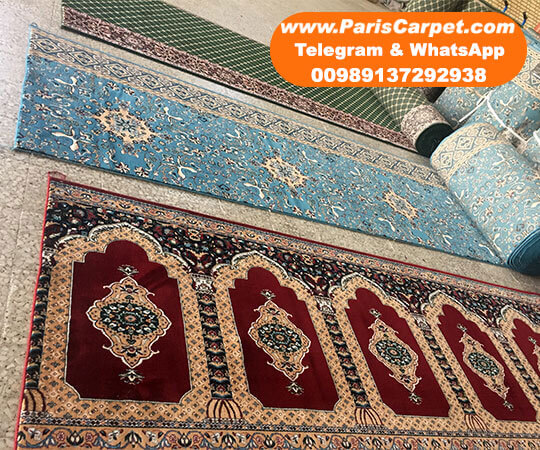 If all the methods are used in the factory to reduce the lint, we will still see that the machine-woven carpet has the original lint. You can use the following methods to remove lint from mosque carpet or home carpet:

– The first and most common method is to use a vacuum cleaner with high suction, which should be repeated for a few days after installing the carpet.

– The second method is to use a special carpet brush that you can gently wipe the carpet by wetting it.

– Also, as a third method, you can use a carpet lint roller to remove the lint from the machine woven carpets.

Wash the carpet to remove lint

If you are planning to wash your masjid carpet to get rid of lint, our first suggestion is carpet washing companies because they use special washing and drying machines. But if you want to wash the carpet yourself, pay attention to the following points:

– Do not use acidic detergents to wash the rug, as it will reduce the life of the carpet.

– After washing, try to tilt the carpet so that the water inside comes out as much as possible, and then put it in the sun to dry completely. If water remains inside the acrylic carpet, it will cause damage and change its color.

By clicking on the green button below, you can get acquainted with the ways of maintaining the carpet: 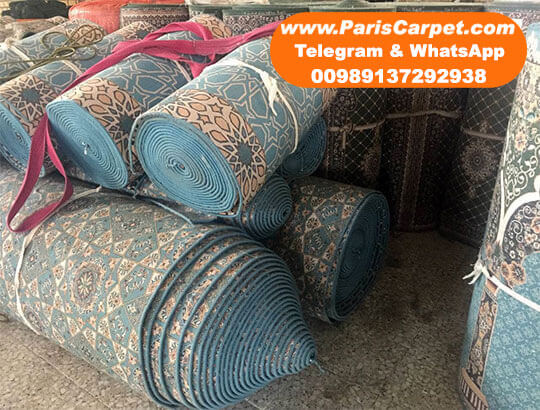 See this article in the original language: https://pariscarpet.com/farsh-mashini-sajadei/